When Johanna first was introduced to Daryal at an Eastern European nightclub in St Pete, they immediately began collaborating, exploring the magical sound and space where movement and music interact. From there the Kafkasso project evolved into the multi-cultural experience it is today!

A first generation Ukrainian-American, Johanna was first inspired by belly dance while visiting Istanbul, Turkey, as a student at the University of Chicago. There she not only was introduced to the cultural dance performances, but was inspired by the way the Turkish people danced in the nightclubs. Men, women, children, grandparents, they all would sway and shimmy their bodies to the music with such joy - Johanna wanted to learn more!

Johanna never dreamed her passion could become her life. Her philosophy, that life is too precious to be wasted by not following your passion, led her to continue exploring her inspiration without apology. What started as a side hustle performing at various ethnic restaurants and parties, and teaching a few classes, blossomed into a lifetime in dance.

Now, Johanna owns and directs Hip Expressions Belly Dance School, founded in 2004 with dancer Karen Sun Ray, and trains students and instructors. With over 16 instructors, they are an inclusive creative cultural movement community. They offer inspiration through many different genres of belly dance, including Egyptian, Tribal, & Fusion, along with other movement forms such as Polynesian, Brazilian Samba, Flamenco, Nia, Yoga, Kali Flow, Tap, Jazz, Burlesque, and Fire Dancing. The community is open to all, and promotes joy in a non-judgemental zone while offering a multicultural experience of classes and performances.

Johanna and Omaris love sharing the stage as a dynamic duo! When Omaris moved to St Petersburg and joined Hip Expressions, her and Johanna began performing together right away. Together, they performed together for nearly a decade at a local dinner theatre, working several nights a week and in several productions. They collaborated with the director and musician on countless special events from New Year's Eve, to International Women's Day, weddings, and other events. For their chemistry on stage they are known affectionately as 'Ebony and Ivory'.

From her first dance classes, Johanna always enjoyed working with musicians on creating performance experiences. She introduced Raihan (already a proficient kit drummer) to his first Middle Eastern drum in the early days of Hip Expressions. They began working together in an improvisational ensemble of music and dance, and are so excited this collaboration continued with Kafkasso! Now working with the entire band for almost a decade, Johanna loves the synchronicity of sound and movement swell with electricity!

A community leader, educator, and entertainer, Johanna's performance love is sharing the stage with musicians and dancers who inspire her. She lives for the freedom of surrendering to the place and time where music and movement collaborate, beyond thought or judgement... To the moment of flow uniquely created by the energy of the participants, a single experience in time that can never be re-created or fully recorded, only experienced. That place... is magic. 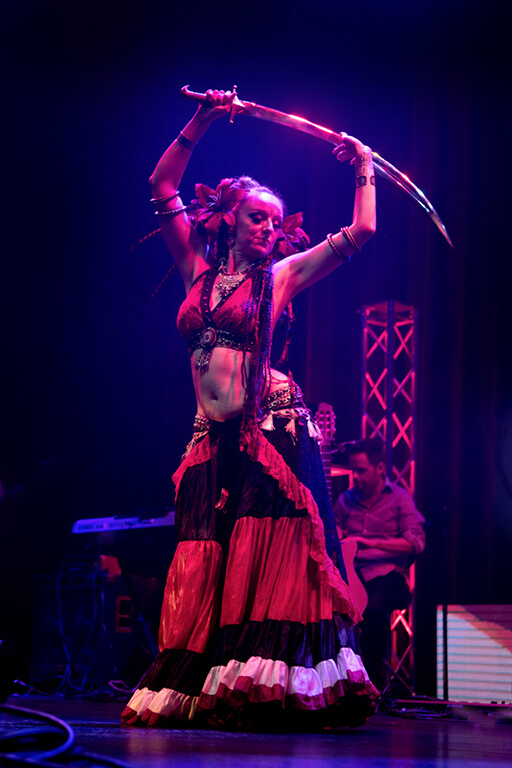